With a long and storied history of climbing, and generally accepted as the ‘Birthplace of Alpinism’, The European Alps are a must-do on any alpine climbers tick list. Follow in the footsteps of some of climbing’s most storied routes, while living amidst the cultural uniqueness of small alpine villages or remote alpine huts. 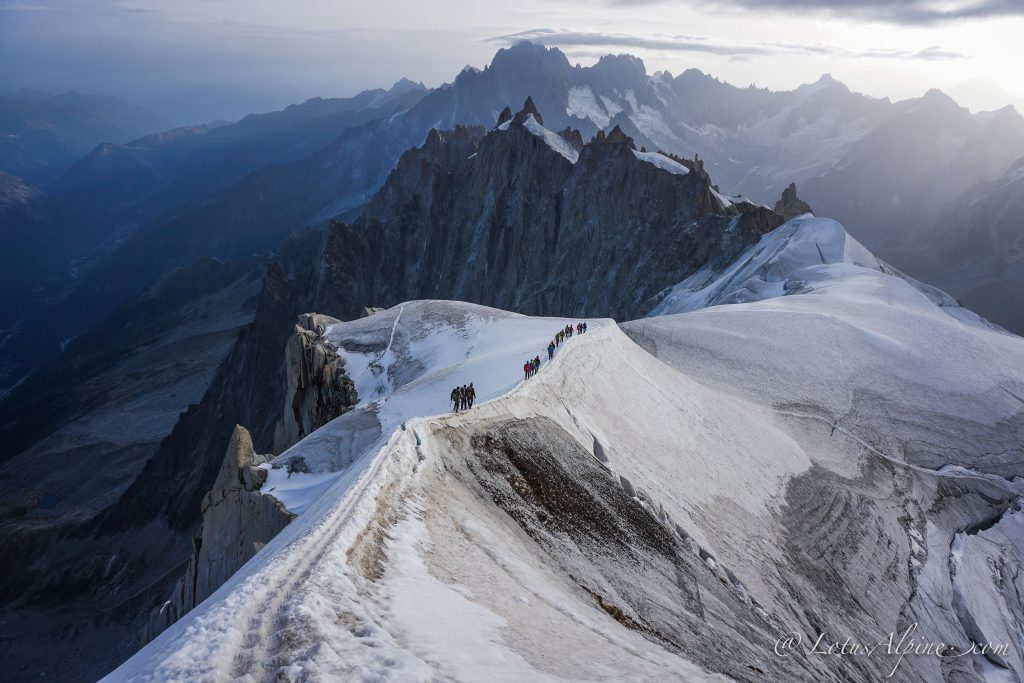 Based for the Summer months in the Alpine Climbing kingdom of Chamonix, France, Lotus Alpine Adventures is situated in the heart of the European Alps, and that allows us to offer up some of the best climbing in the world just minutes from our front door. This steep valley has many lifetimes worth of climbing on the towering walls and peaks that dominate the village skyline, and there is something for everyone of all levels.

Beginner rock climbers and even children, can join us on the hallowed walls of Les Gailland, in the town park, along tranquil lake shores and grassy meadows with unbelievable vistas of the Bosson Glacier. Budding alpinists can cut their teeth (so to speak) and scratch their crampons on mixed snow and granite blocks of the ever popular Cosmiques Arete, just a mere minutes from the Aiguille du Midi tram station, or practice rope work and glacier travel on any one of the dozens of snow and ice objectives that surround the Vallee Blanche.

More experienced alpinists and mountaineers can focus more on certain types of specific climbing skills and objectives such as the golden rock and alpine granite on the South Face of the Aig’ Du Midi; the sinuous alpine ice line of the Chere Couloir; the aesthetic and challenging Midi-Plan Traverse; the mixed snow, ice, and rock objectives of the Pyramid Du Tacul; or the bigger more challenging objectives like the Dent de Geant, Tour Ronde, Entreves, and Grand Capucin, as well as dozens more.

And no trip to Chamonix would be complete without an attempt at an ascent of Mont Blanc, the highest peak in Western Europe, and the one that dominates all of life here in this bustling French village of alpinism. Spend a few days training and getting prepared on the massif’s lower glaciers and less committing objectives, while also getting introduced to the unique experience that is European ‘hut life’, before heading off to travel up the glistening snow and ice covered slopes of this mighty mountain.

Whether it’s queuing up for world famous classics in the tram line of Chamonix, France; following in mountaineering’s hallowed footsteps up The Matterhorn or The Eiger; or subtler and lesser known routes in Italy’s Dolomites; an alpine climbing trip to the European Alps is not to be missed !

If you are interested in booking a trip with Lotus Alpine Adventures, please call our office at
(970) 901-9763 or click here to make a trip inquiry.

TRIP DETAILS:
A detailed list will be provided upon trip booking.

We are proud to partner with and receive support from such high quality outdoor gear brands as: